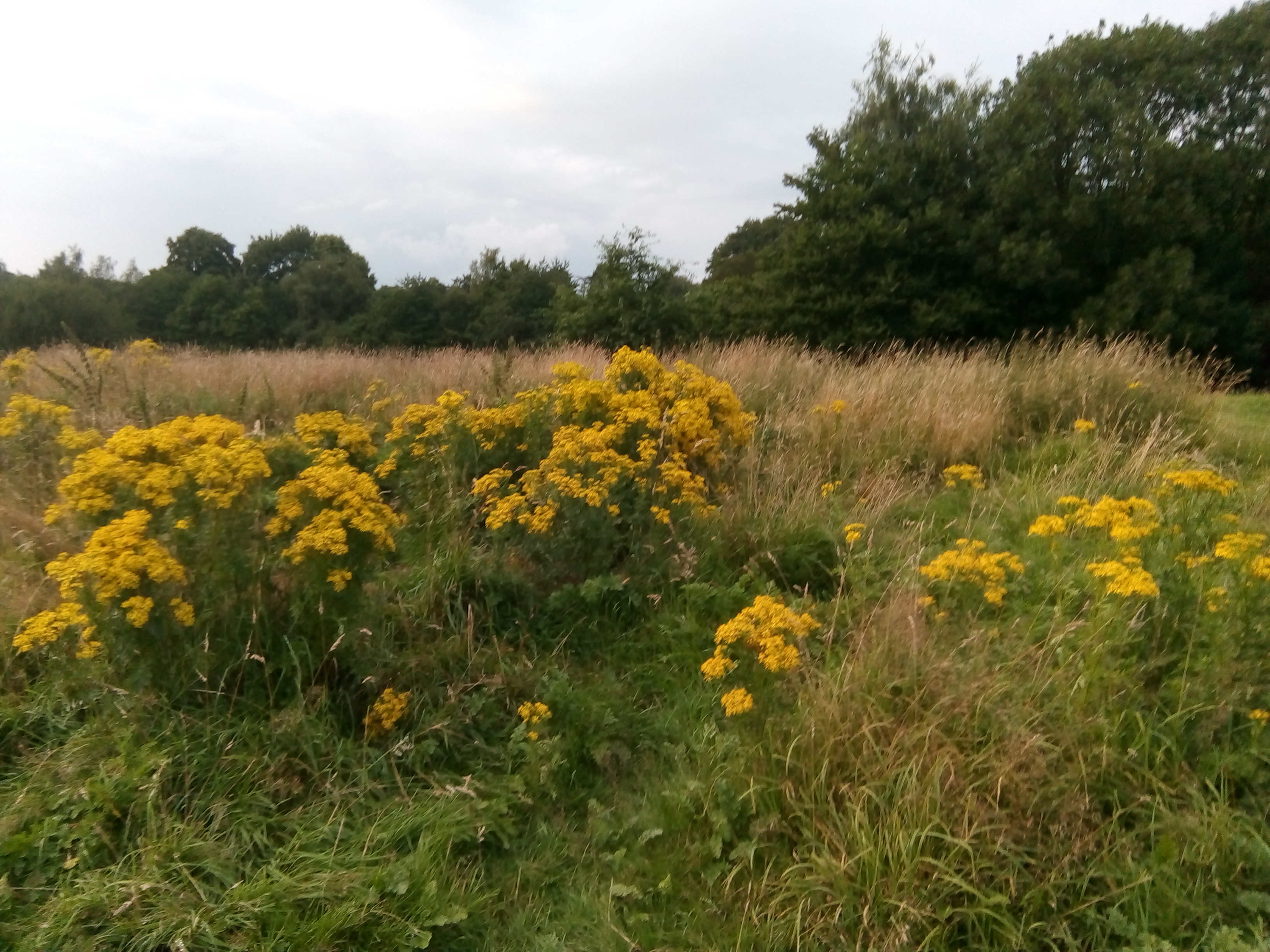 Ragwort is a poisonous weed included in the Noxious Weed Act 1959.  It has been spreading on The Devisdale and is in full flower now.
For a number of years little or no mowing has taken place to keep it under control before it seeds.

Trafford Council have now arranged for Amey and their Contractors to mow the area this week as a matter of urgency.  The use of herbicides (glycophosphates) are no longer allowed and burning is hazardous.  The result is that mowing is the remaining form of control and should be done on an annual basis with the cuttings removed.

The following is a report from David Rome of Amey PLC

When I was last on site I checked for any Cinnabar Moth caterpillars as that would have been a good thing to see.
At Balmoral Orchard in Flixton where the bees are kept we have Ragwort in the orchard meadow. The meadow is cut in phases ideally twice per year.

The Cinnabar Moth is present there so the Ragwort is controlled by a percentage (50% plus each year) of pulling out . This year I have found good colonies of the caterpillar on only x8 Ragwort plants so we do not destroy all the plants. On The Devisdale I found none during my visit but eggs will still be hatching this month so they may be there.

Ragwort is poisonous and it is normal for countryside managers to be gloved in hand pulling Ragwort. However it is mainly a threat to livestock . Most cattle and horses that are experienced at grazing their pasture, avoid it. Ragwort does have the most unpleasant foetid odour , it smells poisonous and I’d think is equally distasteful when eaten .  Selective grazing by cattle and horses allow the avoided Ragwort to proliferate (as does the Meadow Buttercup for that matter). It’s often worse in pasture grazed by horses and sheep because they crop the grass and herb in a field very close and low avoiding the Ragwort. These are perfect conditions for the Ragwort to spread. The result is the classic ‘horse sick’ field  which is seriously infested with it. Animals on horse sick fields may have such poor grazing that they are then tempted to eat the Ragwort out of desperation, and then they will be poisoned. It attacks the liver. On The Devisdale the rabbits are having much the same affect. They are also close selective grazers and have the sense to avoid the Ragwort .  They are creating perfect conditions for it to spread and so it is.

The biggest agricultural danger from Ragwort is when it gets into hay fields, cropped for animal fodder.
My Grandad would have been especially horrified to find it among the hay, because, Ragwort remains as poisonous as when is dried as it was when green. Also in its dried form its harder to detect any unpleasant odour from it and presumably it tastes less awful. Contaminated hay is a classic route to poisoning by Ragwort.