Report on the Civic Society AGM 2022

The Annual General Meeting of the Society took place on Wednesday 30th November 2022 at Altrincham Town Hall. Fourteen people were in attendance.

The Chair Judie Collins welcomed everyone to the AGM and gave a short update on the various projects presently being worked on by the committee.
She said we were extremely grateful to Sue Nichols for completion of the Heritage Website which went live on the internet yesterday. Over a decade in the making it is a tremendous achievement and is sure to become a useful resource to many organisations.
We were please to hear that two new Conservation Officers had been recruited by Trafford Council and look forward to working with them in the future.
She was sorry to report the sad loss of several people close to the Society, Vivian Labaton and Michael Armstrong, both long serving committee members. Also Burgess John Smith, who worked at one time for Altrincham Town Centre Partnership, and was appointed a Freeman of Altrincham in May 2016. He was a great supporter of the Civic Society.
Chair reported that our President was unable to be present due to being in hospital, but sent her thanks to the committee for its hard work and many successes during the year.
After the report from the Chair, the general business of the AGM was conducted and completed.
Town Hall Project Update
Chair introduced Angela Stone who had been the lead in our preparation and submission of an expression of interest to Trafford Council for taking over the operation of Altrincham Town Hall. She explained that we had only a very short time to prepare. Initially Trafford were quite interested, but at a recent meeting their enthusiasm seemed to have wained.
As a general comment Angela said that in the past Altrincham was seen to be a great example of regeneration, with good partnership working and networking, however post Covid things had started to go the wrong way, the latest debacle over the Town Hall being a good example.
Some discussion took place regarding the proposed recent controversial alteration to the town centre traffic flow plan which is soon to be implemented. People were concerned about the impact on businesses, awkward access for delivery vehicles to Central Way and lack of direct access to the new Regent Road Multi-Storey Car Park.
Guest Speaker
Chair then introduced Matt Colledge, who is now working for High Street Task Force which is a Government Initiative, through the Institute of Place Management at Manchester Met.
Matt gave a short talk on his work with the High Street Task Force and Place Managament, focusing on data which had been collected through visiting hundreds of towns in the UK.
Presentation of the Don & Hilda Bayliss Award for 2022 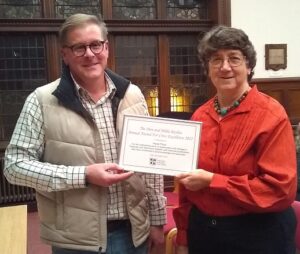 Matt Colledge presented the Don & Hilda Bayliss Award for Civic Excellence to local historian Hazel Pryor (pictured right). Hazel thanked the society and said she had worked with both Don and Hilda on past projects and was honoured to receive it.
Closing remarks from the Chair
In closing the meeting, Chair Judie Collins thanked Matt Colledge for his interesting contribution and thanked her hard working committee in a year which had been very challenging. She reiterated that we would welcome anyone who would like to join us particularly from Broadheath and Bowdon.
The Meeting Closed at 9.15pm.
Previous Next